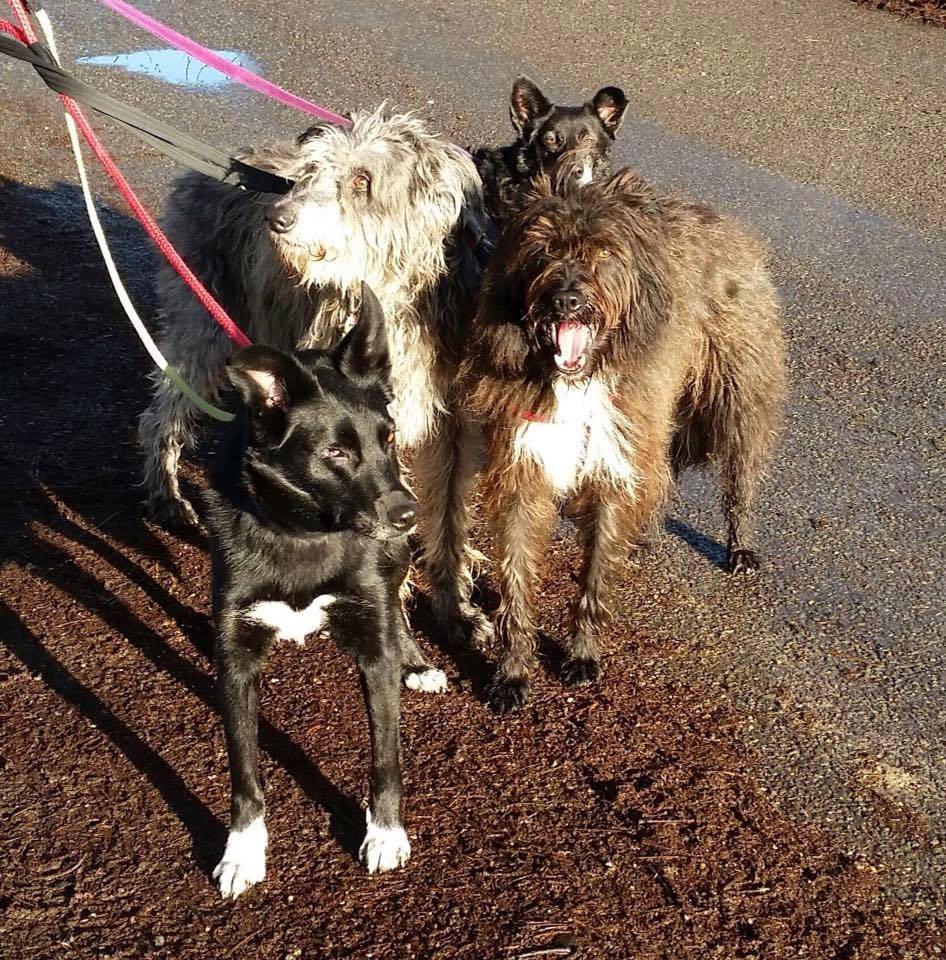 Bing (front) with his new family.

Bing lived in a shelter with 350 other dogs from when he was a young pup. His one eye is damaged but he can see perfectly with his other eye. Maybe it was because he is black, but BDRUK promoted him many times without success and then finally, this year, it was his turn to get a home. Bing is very shy and having been plucked from the only life he knew, he struggled a little in the home and the adopter sadly decided she was unable to cope with his fear. So he made another journey to my house just over four weeks ago.

Unlike other dogs I have dealt with, Bing's fear is just fear, no aggression whatsoever. He was carried into the house and immediately bolted into a corner, urinating in fear. We had set up a covered crate but he was not at all comfortable with that and ran back to his corner, so we put him a bed in that place which happens to be by the stairs door where we frequently passed. For a couple of days he remained in a catatonic state, neither eating or drinking but at night, we would shut him in the kitchen on his own with his food and by day 3 he was eating during the night. By the first week, he had begun to watch the other dogs eating and gradually he adjusted to their feeding times, not always emptying his bowl but then he was not doing anything to use energy. We gradually began to interact with the other dogs in front of him, avoiding any eye contact as this is a big deal to a fearful dog

Although my one Romanian adores other dogs, any invites to play were ignored and he latched onto dear old Kitty who is much calmer. And so the ventures into the outside world began with Kitty by his side for guidance. She is so laid back and calm that at any threats, he would look to her to gauge the reaction. By the beginning of week 2, Bing was clean in the house and peering around the corner when we entered the kitchen. Now at week 4, he loves his walks and runs around excitedly when the lead comes out. He still shies away from us when we put the slip lead on but once he is dressed ready for his walk, he will follow willingly.

He also has begun to look up at you on a walk, takes the time to sniff all the dog smells around the village, is completely unfazed by pigs, horses, goats but people approaching do tend to send him into freeze mode so I often stand and chat and after a minute or two he will approach and sniff them, the same for other dogs. Bing will eventually make a great dog, he is intelligent and quick to learn and out of all the treats presented, cheese sends him into raptures so a great training reward when he is ready.

Bing's story has a very happy ending - his foster family decided to adopt him!