Costi, the journey of a Romanian rescue dog: part one 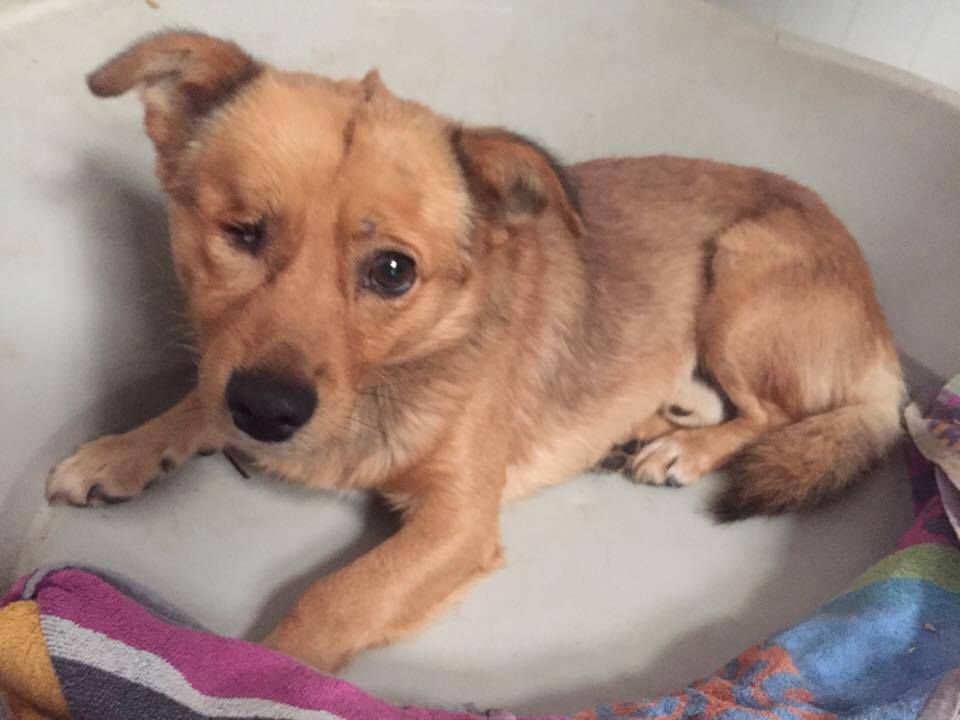 Costi is currently in foster with one of the BDRUK trustees. This is the first of a series of blog posts we will be sharing to illustrate how it is both challenging and extremely rewarding to help rehabilitate an abused dog and show them how to live in a loving home.

Costi was a little stray who was fed by a lady called Luminita. One day he disappeared and when she next saw him he had a swollen, bloody face and he had lost his eye. He was terrified of people. Luminita and her friend Marlena found a foster place for Costi at the Help Labus shelter at Galati and Luminita managed to catch him and took him to safety.

Blind Dog Rescue UK agreed to take Costi to a foster home in the UK with me (Bridget) and a travel date of 17th January was booked. Wearing a smart new harness, Luminita loaded a very scared Costi into a car to take him to meet the transport.

For two days Costi travelled with Eli for Pets across Europe and arrived at Kennels in Hertfordshire for a short stay. On Sunday the 22nd of January 2017 I collected a very scared Costi from the kennels and brought him home to start his new life.

When Costi arrived, I had set up a crate for him in the kitchen underneath our kitchen table. It was clear from the start that he had no intentions of going in the crate so I moved it and put his bed under the table and a puppy pen around him to keep the other dogs away.

Initially, he hid his face behind anything that he could, hoping like a child that because he couldn't see me, I couldn't see him. Amazingly, even on the first day he ate a good meal (Chappie) although at all times I was careful not to make any eye contact with him and just ignored him.

He used the puppy pads to toilet although it took him nearly 48 hours until he 'performed' at all, such was his fear. He showed absolutely no interest in my dogs at that time, but seemed to be very placid with them and didn't worry if they came near the pen, even when he was eating. Night-times were ok as he stayed in his pen and slept quietly for around seven hours.

Getting a little braver

The following few days saw some tiny glimmers of progress. First of all Costi started to stand up at the back of the pen to eat, always keeping a watchful eye on what I was doing. Gradually, I was able to move his bowl nearer to the front of the pen and he would come forward to eat, licking his lips in anticipation on a couple of occasions.

He had moved from having his head behind the dog bed to actually sleeping IN the bed, mostly with his good eye watching but once or twice I caught him asleep, and twitching as he dreamed.

He still had no interest in my dogs at all, but no signs of any aggression either which was important. He still had great fear of myself and David and we still made no attempt to touch him, but threw high value treats into his pen as we walked past. Cheese immediately seemed to be the number one treat and I cut a block into tiny cubes so we could throw a couple to him.

Initially, he flinched if the cheese hit him but it didn't take long until the thought of the cheese had him pricking up his ears and licking his lips. Every time I threw the cheese I said his name and soon saying 'Costi' elicited the same reaction as a piece of cheese which he knew was coming!

He continued to be a very good boy at night and, on the whole, clean in his pen.

The pen comes down!

Once I was sure that Costi would be ok with my dogs, and he had shown a few signs of becoming more relaxed, I took the front of the pen down during the day. The dogs went in to look at him and other than a curled top lip on one occasion, Costi continued to ignore them. I still penned him for feeding times, and he continued to use the puppy pads when he needed to. 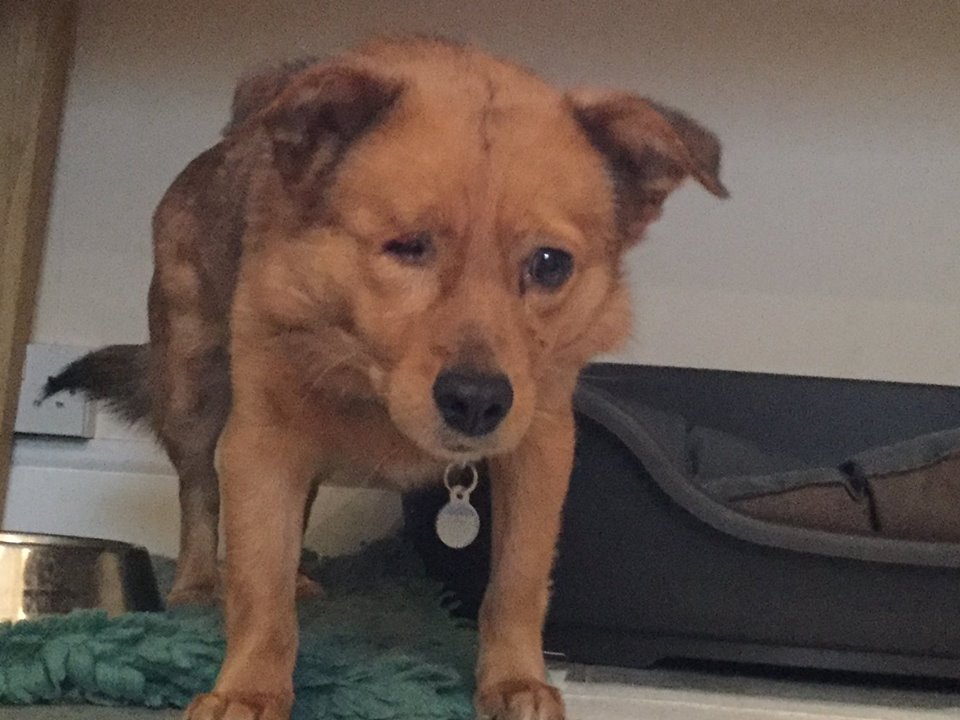 The cheese is the thing!

Who would have believed that within a week, Costi would be accepting cheese from my hand? Very tentatively at first, I had to move my hand to him, but after a few more days, he would stand up and then take a small step towards me. Each day I moved the criterion on a bit. First he had to sit up, then stand in his bed, then two feet on the floor, then four feet on the floor out of his bed and now he is walking across the kitchen to me to get the cheese. If he doesn't come, he won't get it! I sit dead still and let him take the cheese then he retreats back to his safe area. Each day the retreat has become less rushed, but one false move and he scurries back. I have even managed to gently scratch under his chin and stroke his back leg while administering a cheese reward at the front end! He HATES having his body touched so that will wait for a while!

A few days ago, I surprised Costi in the kitchen and found that he had come out of his safe place and was in one of the other dogs' beds! And there he stayed for the whole evening!

The cheese treats are continuing to have a great effect on Costi. He has been here exactly three weeks and has made a huge amount of progress. He is still scared of us and of the dogs to a certain extent. He ignores them. With me, he now looks up when I walk into the kitchen and pricks his ears up if I say his name. He licks his lips in anticipation of his cheese rewards, and can be lured out to about halfway across the kitchen.

When I'm out in the garden with the other dogs, he comes out and walks around the kitchen seemingly fairly confidently as there are no humans in sight. He has also ventured into the porch which adjoins the kitchen and this morning went on into the utility room which is the last stronghold before the garden.

This morning (13/2/17) a little ginger face appeared through the cat flap while I was outside and then popped back in again. He is definitely showing interest in the outside world.

Our garden is dog-proof, but I'm fully aware that his lack of bonding to us would mean that were he to escape, he wouldn't want to come back. We have checked, double checked and triple checked the garden and there are no places he can escape unless he can scale a six foot fence.

However, with Rommies (Romanian rescue dogs) you never know, so he will wear a harness and have a long line attached to it. He will also have a line attached to his collar. He won't walk but may try to do a runner so he needs to be secure at all times. It will be interesting to see how far outside he will come. I'm sure that he will have to be carried back inside again. Time will tell.

Yesterday we had a small setback. Costi has been showing the desire to go outside, so I attached the long line to his collar. Noticing that his collar was a little loose, I undid it, tightened it slightly and then attempted to put it back on. Costi had other ideas and decided to leap from bed to bed like a nervous gazelle determined not to let me put the collar back on. After a couple of minutes he gave up and the collar was back on him. I was cross with myself for attempting to adjust his collar and thought his progress would have been put back.

However, the incident showed the resilience he has already developed as he took a couple of pieces of cheese and seemed no more traumatised than he'd been before.

Of course I regretted what had happened, but as my husband said, "He's fine. Put it behind you and move on!".

It won't be smooth progress so that's a good motto for us! Well done Costi!