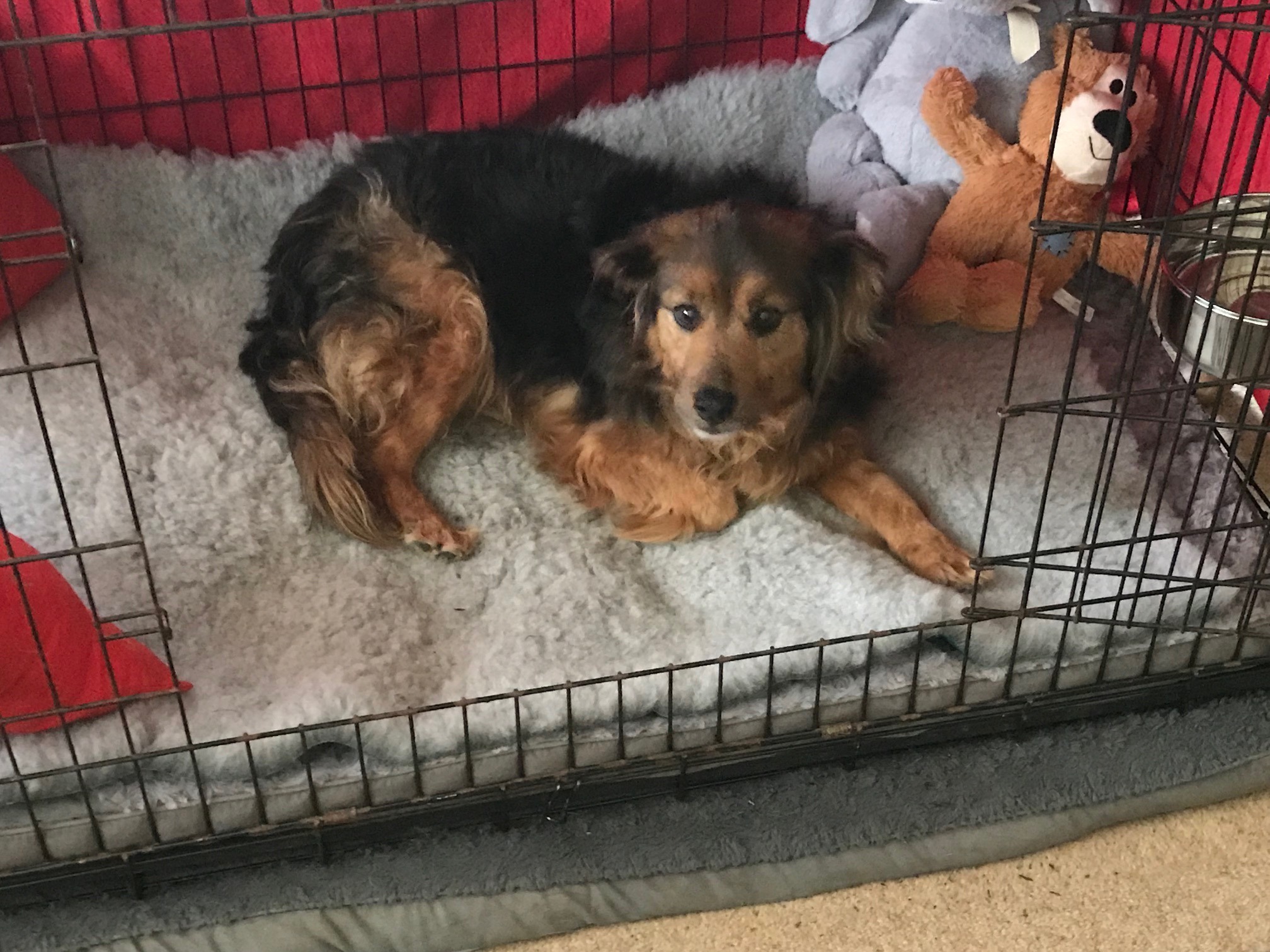 It is now two weeks since Alex joined us. I have a pack of three GSDs – two males and a female – and they were the inspiration for his adoption. Following the passing of my ancient JRT, these spoiled darlings have started to howl at night, when I walk the other two dogs and one is left behind alone. So, this triggered my thinking, but then, the thrill of the whole adventure took over and I just WANTED Alex. I fell completely in love with his photos, his little winsome face, and his heartbreaking story.

Alex had been in his rescue centre in Romania for years waiting for his chance of adoption. I cannot understand why he wasn’t snapped up. This is the most amazing part of his terrible tale to me. He had been rescued from gypsies in a bad state. He followed their vans as they travelled and had been injured and paralyzed even, as a result of traffic accidents. I am amazed that he survived and yet, nowadays, my vet seems to think him hale and hearty for his age. I just cannot believe what has happened to him. Now all that I want is to convert him into a ‘pampered pooch’. He has now committed, very happily, to the early stages of training.

I call Alex, ‘mighty’. Because I think that this is his self image. He must have been overawed to come to a strange house, and be surrounded by dogs, who from his perspective must have seemed to be giants. He was obviously subdued and probably nervous. Initially, he was kept separate, meeting them only through the bars of a dog gate or his crate. His reaction? He snarled them off. They retreated to my command and his self image was reinforced.

My overwhelming memory of this fortnight will be of how much Alex loves his crate. He comes in now from being outside and scampers back there, frolicking like a baby lamb. He is often fed, at such times, so his anticipation is as much of food as his crate. But there is no doubt that he relishes the luxury of his own sanctuary space, above all. I have seen photos of him surrounded by all sorts of dogs in the shelter. He would stand in the middle of a dusty yard and could be assailed from all sides. I can hardly envision what he must feel nowadays to know complete physical safety for probably the first time in his life.

No wonder he sleeps. Have I mentioned that? He must sleep for twenty hours a day or more. (He is so cute as well. He makes the most lovely snuffly baby noises. But I digress!) At first, I thought it must be stress induced, but no. I think this is how he will be. He loves to cavort briefly in the garden and he even shows interest in his walks for a short while. But basically, his deepest happiness is to sleep in his own space – his beloved crate. I do separate him from it during the day, when I am working in the office. Then he condescends to make do with his armchair. But he must feel badly used, as nothing is a luxurious, and it is not exclusively his! No, his crate is his first love.

And Alex has his own ways of communicating very clearly how he feels. I tend to still have to fight against a cognitive dissonance. I can still think of him as a sweet pup. He is so small and round, so even his physique reinforces this. In fact, he is a wily old gent with ‘street smarts’, who has very definite ideas of what he wants. He can be quite agreeable to the notion of going out, sometimes. and will trot along happily. At others he just says, ‘No thank you’. He feels no stirrings of any need to please or even obey. He is okay and so that is that. It is completely hilarious. If I urge him, he just goes ‘doggo’ and I have to lift him bodily. Whenever did this strategy work? He is so tiny, even a child could lift him, and yet the mighty Alex thinks that this resolves all discussion. Happily, he is philosophical. When he has been made to come out, he does so with a cheerful enough attitude. He doesn’t hold grudges and he is, as always, unbearably sweet.

What a lark it has all been. I think he has had unhappy moments such as being taken to the groomer and the vet so soon. Both were necessary and then he will need dental surgery and to have a lump removed in weeks to come. But pheeeew, he is here and he is happy. That is everything to me. I know of no greater pleasure than to relax with my dogs around me. His crate practically blocks the view of the TV it is so near. And, when he wakes, the first thing that he does is to glance up immediately to see where I am. It melts my heart. Then he slowly lowers his head again and he stretches his tiny paws, luxuriating in the softness of his vet bed, knowing that he is home and safe and all is well.

I don’t know anything that can compare. I imagine having children must be like this.  My dogs are my furbabies and, even though Alex is old and mighty, he will always be that for me.

There are no words …